Sleep is awesome. When you get sleep, suddenly the things you were missing about God have a clear link into your soul. Sometimes the most spiritual thing you can do is sleep... be still, know He is God, and snore.

I share that because I can get so much more out of the general sessions when I have been well rested. I wonder where that might be true in your life today... as you do what you do and have the chance to hear from God in even "that." When we're tired, our God antenna can't get the juice to raise up.

Skit Guys (entertainment): I read that they were on the schedule. Unfortunately I missed it because of a family emergency phone call I had to take. Everything is fine now, but it's tough to hear about stuff you can't take care of when you're in another state.

Shane and Shane (lead worship): Man... two guys and two acoustic guitars. I like the pace of starting with these two because it really helps recenter our hearts back on to the Lord.

Phylis Tickle (speaker): The woman can bring it. Some of her points....

Chris Tomlin (lead worshipper): I don't know how he does it, but he always seems to be giving his best effort every time he leads. It's like he's in on this journey to connect with God himself and not just to "do his songs." That makes all the difference between me standing/singing versus engaging/worshipping.

Now, that aside, after the speaker got off the stage I went over to thank her for presenting and ask if we could talk. Her sociological insights alone were well worth the price tag of the convention, and the audience knew that (evidenced by their standing ovation). I really loved her last thought... "If you get up off your knees before thirty minutes have passed you've probably missed everything I've said here today."

That's why the gentleman who cut in front of me confused me. His problem was that in all that she said she shared insights that weren't directly out of the Bible. Although (in my opinion) they were biblical in nature, because she didn't quote things chapter and verse she was "off." 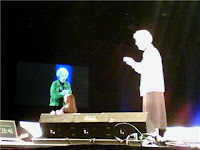 First off, this is wrong for anyone to do to a speaker after they've put themselves out there for 45 minutes. I am most vulnerable to criticism right after a sermon, and tend to take it too deeply in that moment. Likewise, it's the worst time for me to hear affirmation because then my ego just gets bigger. This was bad timing altogether.

Then there's the issue of tone... it was very negative, which can discourage someone from coming back to speak again. Marko was there to point this out to the gentleman, during which time I had the chance to thank Ms Tickle for her message and try to put a healthy deposit into her spirit. She's a pro and didn't need it, but hopefully God used it nonetheless.

So I stepped into run some interference. This guy had a chip he needed to get off his shoulder... okay, I'll take that, thanks.

"Can I just ask about what you're bothered by?" He responded... with full passion, fearful than unless we quote the Bible we're just drifting off on our own. I asked if he'd seen Shane Claiborne last night, and he said he missed it but heard about it and thought that "Was great!"

"What's your fear in all of this?" I asked. More dumping out... this was helping him diffuse. Cool.

"Can I ask if you communicate every week?" He does. "My guess is that you read from the Bible, but maybe add some thoughts on top of it, right?" He does. "So Shane is one extreme, and Phylis is another... you're in the middle, and I get that because I am, too."

"I'm with you on the Bible, but even the Bible itself says that we will worship God in Spirit and in Truth. Maybe she was less on the trackable 'Truth' for your tastes, but that doesn't diminish the role of the Spirit."

"God gave us the Bible," he said, "and that's how He speaks. There is no other way." 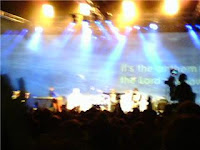 "So what's your thought on the Bible speaking about how if we have not love everything we do is but a clanging cymbal?" I shared this, by the way, while everyone else in the room was worshipping God through Chris Tomlin's tunes. Meanwhile, my new friend was yelling and distracting everyone... ironic timing.

"YES! BUT JESUS OVERTURNED THE MONEY-CHANGERS IN THE TEMPLE, TOO!" Now he was pointing to make his point. "AND THE BIBLE SAYS TO WHOM MUCH HAVE BEEN GIVEN MUCH IS TO BE EXPECTED! IF SOMEONE IS TO STAND ON A STAGE THEN THEY HAVE TO STAND ON THE BIBLE!"

"Because the Bible also reminds us that if someone is caught in a sin that we who are spiritual are to restore that person. But we need to do this with gentleness and respect and reverence, right?"

"Well..." And that's when the conversation was its healthiest. He did admit that he came on too strong and got lost in making a point. His concern was to be sure that he spoke with her and not about her, which I do respect. It's easy to toss bombs at people from a blog or afar, but I respect it when someone is willing to make the connection in person. Bad timing and spirit, of course, notwithstanding.

So hopefully while I've shared this situation with you, I have tried to do the same... gentleness and respect matter in all matters. Please hold me accountable in this.

shared out of the life of tonymyles at 3:07 PM

Labels: conference notes, nywc, ways we treat each other

Wow, I jumped over here from Marko's blog. Way to be a peacemaker. That could have really turned into a much uglier situation but it sounds like God really used you in that situation.

I am so glad you have this blog on here. I just returned from the conference and wanted to sit and blog on my own - specifically about Tickle because - crash bang bam - so many things she said hit a thousand connections in my head tying together so much of what I have seen in media, in my friends, in pop culture, and yes in our churches -- things I did not have a word for or a coherent string of thought to center on... all to be worked out extensively now that I am home and can wrap my brain around it... and then I read on to this encounter and am shocked and saddened and am happy you were able to mitigate the situation. I talked to Tickle today before I left and she is working on a book to flesh out everything she said, so keep your eyes posted...

me, I gotta get on my knees in the meantime.

That dude isn't "into the Bible" or a "biblicist" or "Bible lover."

He's afraid. Afraid of losing control. Afraid that if he has based his whole relationship with God on the basis of the Bible alone (which he hasn't, although he probably sees it as foundational), then if you take out the Bible, then the whole house falls.

Agreed... and yet I love the Bible, too. It's a fine balance to be a worshipper in Spirit AND in Truth. We usually go with one over the other.

Tony, thank you so much for this blog post. It was great meeting you at NYWC.

What is your take on Phylis' comment near the end that "scripture is no longer the authority?" Sorry so late posting.

That's a great question, Pam. I think if I heard that someone said that out loud I'd have to say that I disagree with them.

However, having been there for the talk and taken in the context, Phylis wasn't stating her own belief but rather what the common culture believes. Her point in that statement was that there was a time when people would do something because "the Bible said so," but now they long to see a more romantic connection to the Scriptures than pure obedience... they want to feel the texture of God's truth and not just bow down to the black & white end of it.

So in that context, I understand her comment... I'd have to say in my experience with people this is a true statement of how many view the Bible.

All the more reason to BE the Church to such folks, reach out instead of condemn, and give them every good opportunity we can to help them see Jesus in tactile ways through an authentic lifestyle of following Him.

wow. what an interesting story. i was at the convention and loved phyllis--more than any other speaker, actually. i thought she was spot-on. i grew up in a church that had turned the Bible into an idol. that path can be so destructive. you should teach a course or write a book on conflict management. impressive approach.

stuff you may have missed

labels that connect all of this 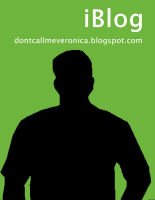